This is a restoration of an unfinished, never-before-seen game from indie Japanese developer Orokana Soft. Taking mechanical inspiration from contemporary RPG games, Mennui was Orokana's attempt at a platformer arcade game that could appeal to RPG fans. The source code, thought to be lost after the studio folded in 2004, was only discovered recently by former lead programmer Goto Takuya in an old thumb drive, which was then sent to us for restoration.

We've also translated the instructions Orokana was planning to include on the side of each cabinet; these are reproduced below.

Carter Jour, the Green Mage. Carter is a very helpful person by nature, so when he heard about the evil influences of the Mennui, he agreed to help without hesitation. He wields earth magic, which is effective against Blue but not against Red. He has mastered earth magic to the point that he can use it to cure other's wounds. He can even resurrect his teammates from the dead.

Not much is known about the Blue Mage, despite being the strongest hextress alive. A bit of a lone wolf, she was only convinced to fight the Mennui because she owed an old favor to William. What is known about her is that she wields ice magic to great effect against Red, although Green is her weakness. She also knows how to displace her position with her allies, and even how to slow down time.

Rebuild the Coin of Power to drive the Mennui away for good.

Collect 30 of these power rings to rebuild the Coin of Power and defeat the Mennui. Unfortunately, the power rings are really shallow. As long as the Green Mage is alive, they only respect mages who share their colors.

These band-aids each restore one mage to full health on use.

These ugly bugs are the foot soldiers of the Mennui's army. They used to be butterflies, but the Mennui's evil influence disfigured them beyond recognition. They always chase down the nearest mage.

Hamsters are normally cute and cuddly, but the corrupting influence of the Mennui warps their minds. They aren't hard to hit and don't move very far, but their poison gas really hurts. Destroy the power gem to free them from the Mennui's grasp!

Geese are already evil so the Mennui didn't have to do anything to get them to attack our heroes (which is also why they don't have any elemental powers). They only ever attack one mage and you can shoo them off with a couple of well-placed spells, but they sure are annoying! 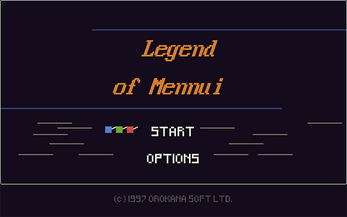